Ever since I read the highly praised article by Floyd Romesberg in Nature back in 2013 I got really interested in synthetic biology. In said article, an unnatural base pair (UBP) was not only inserted into a DNA double strand in vivo  but the organism was even able to reproduce the UBPs present in subsequent generations. 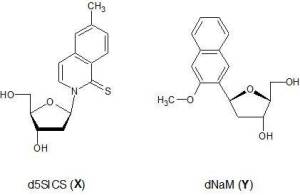 Romesberg’s Nucleosides. No Hydrogen bonding is formed between them!

Inserting new unnatural base pairs in DNA works a lot like editing a computer’s code. Inserting a couple UBPs in vitro is like inserting a comment; it wont make a difference but its still there. If the DNA sequence containing the UBPs can be amplified by molecular biology techniques such as PCR it means that a polymerase enzyme is able to recognize it and place it in site, this is equivalent to inserting a ‘hello world’ section into a working code; it will compile but it’s pretty much useless. Inserting these UBPs in vivo means that the organism is able to thrive despite the large deformation in a short section of its genetic code, but having it replicated by the chemical machinery of the nucleus is an amazing feat that only a few molecules could allow.

The ultimate goal of synthetic biology would be to find a UBP which codes effectively and purposefully during translation of DNA.This last feat would be equivalent to inserting a working subroutine in a program with a specific purpose. But not only could the use of UBPs serve for the purposes of expanding the genetic code from a quaternary (base four) to a senary (base six) system: the field of DNA origami could also benefit from having an expansion in the chemical and structural possibilities of the famous double helix; marking and editing a sequence would also become easier by having distinctive sections with nucleotides other than A, T, C and G.

It is precisely in the concept of double helix that our research takes place since the available biochemical machinery for translation and replication can only work on a double helix, else, the repair mechanisms get activated or the DNA will just stop serving its purpose (i.e. the code wont compile).

My good friend, Dr. Rodrigo Galindo and I have worked on the simulation of Romesberg’s UBPs in order to understand the underlying structural, dynamical and electronic causes that made them so successful and to possibly design more efficient UBPs based on a set of general principles. A first paper has been accepted for publication in Phys.Chem.Chem.Phys. and we’re very excited for it; more on that in a future post.