The Institute of Chemistry of the National Autonomous University of Mexico becomes 70 years old this month, and to kickoff the year round celebrations our institution has organized a series of lectures with the notable presence of Nobel Laureate, and former student of this institute, prof. Dr. Mario Molina whose presence has become ubiquitous within the Mexican scientific community events given his status. His presence is also relevant under the scope of the new branch of Instituto de Química, which is the Joint Center for Research in Sustainable Chemistry from which I write these lines. I have many fond memories of the time I spent there as a grad student; I specially miss the beautiful area on campus on which it’s located next to the buildings of other science institutes.

The lectures to be given are the following, click on them to download a small abstract from each:

And now gather ’round for some history!

The Institute of Chemistry (Instituto de Química) was founded on April 5th 1941 with the mission of organizing the -then small- existent chemistry community in Mexico. Since three years before that, former President Lázaro Cárdenas expropriated oil wells and refineries from foreign companies, there was a strong need for more specialized human resources in the different areas of chemistry who could develop our incipient  petrochemical industry. Thus, one of the first tasks of Instituto de Química was to develop a method which could provide all tetraethyllead (IV), an organomettallic compound which was used as an antiknock additive in gasolines, way before it was banned for being highly toxic.

Tetraethyllead - now toxic, this was an important component in gasoline as well as in other fuels

One of the major historical contributions of Instituto de Química was the work of Dr. Luis Miramontes (1925 – 2005), who worked in the development of the synthesis of progestin, a synthetic hormone which was used in the first oral contraceptive*; an amazing achievement for a 26 year old doctor! Along with Dr. Miramontes, Dr. George (now named Jorge, although née György in Hungarian) Rosenkranz, from the pharmaceutical company Syntex and Dr. Carl Djerassi, who is called the father of the pill, this enormous scientific but specially social groundbreaking achievement was accomplished. It has long being argued that a Nobel Prize should have been awarded to this international trio of chemists, but nevertheless worldwide recognition is due. 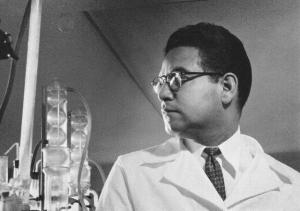 Many are the achievements of Instituto de Química on many different branches of science; from synthetic organic chemistry to natural products research. The institute has hold six Professors Emeritus so far and continues to be one of the leading chemistry research facilities not only in Mexico and Latin America but in the world. Keeping track of our history helps us maintain our identity as scientists as well as to preserve our cultural heritage, all which in turn allows us to find paths into the future so we may keep on doing the inspirational science our country, and the world, needs. Many are also the issues on which we have to work in order to keep it competitive and to bring it back to the cutting edge of science. The research staff of the institute is highly committed to achieve so in the next few years by developing both relevant scientific knowledge and human resources who can make further contributions to the advancement of chemistry, and science in general, whithin our country.

Thanks for reading, rating and commenting!

Main entrance of the institute and current staff (well, most of it anyway)