I found it surprising that the trichloromethyl group could be chemically reduced into a methyl group quite rapidly in the presence of thiophenol, but once again a failed reaction in the lab gave us the opportunity to learn some nuances about the chemical reactivity of organic compounds. Even more surprising was the fact that this reduction occured through a mechanism in which chlorine atoms behave as electrophiles and not as nucleophiles.

We proposed the mechanism shown in figure 1 to be consistent with the 1H-NMR kinetic experiment (Figure 2) which shows the presence of the intermediary sulfides and leads to the observed phenyl-disulfide as the only isolable byproduct. The proposed mechanism invokes the presence of σ-holes on chlorine atoms to justify the attack of thiophenolate towards the chlorine atom leaving a carbanion behind during the first step. The NMR spectra were recorded at 195K which implies that the energy barriers had to be very low; the first step has a ~3kcal/mol energy barrier at this temperature. 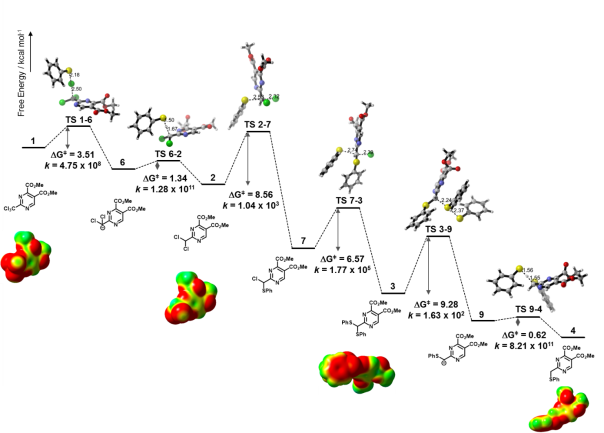 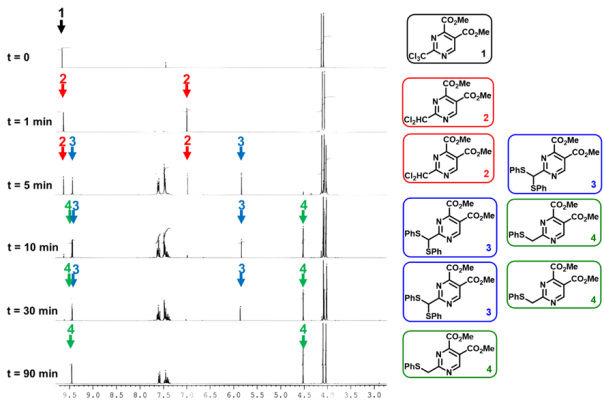 1H NMR of the chemical reduction of the trichloromethyl group. Sulfide 4 is the only observed byproduct

To calculate these energy barriers we employed the BMK functional as implemented in Gaussian09. This functional came highly recommended to this purpose and I gotta say it delivered! The optimized geometries of all transition states and intermediaries were then taken to an MP2 single point upon which the maximum electrostatic potential on each atom (Vmax) was calculated with MultiWFN. In figure 3 we can observe the position and Vmax value of σ-holes on chlorine atoms as suggested by the mapping of electrostatic potential on the electron density of various compounds.

We later ran the same MP2 calculations on other CCl3 groups and found that the binding to an electron withdrawing group is necessary for a σ-hole to be present. (This fact was already present in the literature, of course, but reproducing it served us to validate our methodology.) 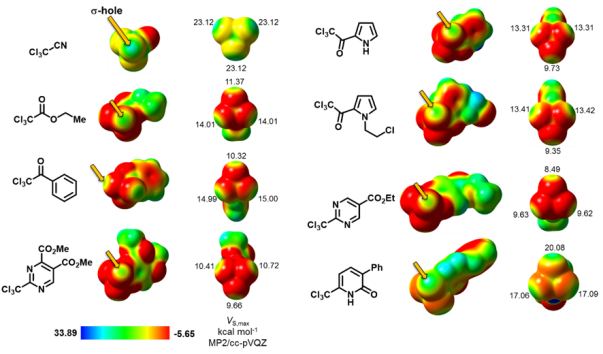 We are pleased to have this work published in PhysChemChemPhys. Thanks to Dr. Moisés Romero for letting us into his laboratory and to Guillermo Caballero for his hard work both in the lab and behind the computer; Guillermo is now bound to Cambridge to get his PhD, we wish him every success possible in his new job and hope to see him again in a few years, I’m sure he will make a good job at his new laboratory.