Last Friday Durbis Castillo-Pazos became officially a graduated chemist. His presentation about the in silico development of entry inhibtors  for the HIV-1 virus was very clear and straightforward and he performed admirably during the examination for which he graduated with Honors from the Mexico State Autonomous University (UAEMex).

Ever since he came to my lab, Durbis was adamant to work in some project related to medicinal chemistry which is not really my thing. Still, we were able to take an old project related to the in silico design of entry inhibitors for the protein GP120 which is responsible for the entry of the HIV-1 virus into human T-cells; the very first stage of the HIV infection which leads to AIDS. The lengths to which Durbis took the project were remarkable but none of that would have been possible without the leadership of my good friend and colleague Dr. Antonio Romo from the Queretaro Autonomous University (UAQ) who not only guided us through the nuances of the field but also on the intricacies of working with Schrödinger Inc.’s software, MAESTRO.

Suffice it to say that based on a piperazine core and four thousand fragments with commercial pharmaceutical applications, Durbis built a 16.3 million compounds library from which a few candidates are selected as potential drug molecules after several docking steps at various precision levels and molecular dynamics simulations plus QSAR related analysis. More about the details in future posts. 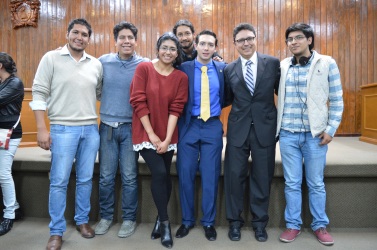 The knowledge gained by Durbis allowed him to become a member of the QSAR team led by Dr. Karina Martinez, at the Institute of Chemistry UNAM which provides QSAR studies to various companies who want to submit this kind of studies for regulatory purposes. Durbis has his sight abroad and has been admitted to a prestigious graduate program where he will keep seeking to improve his knowledge on medicinal chemistry. I’m sure he will succeed in anything on which he sets his mind.