As opposed to physicists, chemists are pressed to defend a utilitarian view of their work and possibly because of that view some computational chemists sometimes lose sight of their real contribution to a study, which is far from just performing a routine electronic structure calculation. I personally don’t like it when an experimental colleague comes asking for ‘some calculations’ without a clear question to be answered by them; Computational Chemistry is not an auxiliary science but a branch of physical chemistry in its own right, one that provides all the insight experiments -chemical or physical- sometimes cannot.

I’m no authority on authoring research papers but I encourage my students to think about the titles of their manuscripts in terms of what the manuscript most heavily relies on; whether it’s the phenomenon, the methodology or the object of the study, that should be further stressed on the title. Papers titled “Computational studies of…” usually are followed by ‘the object of study’ possibly overlooking the phenomenon observed throughout such studies. It is therefore a disservice to the science contained within the manuscript, just like experimental papers gain little from titles such as “Synthesis and Characterization of…“. It all comes down to finding a suitable narrative for our work, something that I constantly remind my students. It’s not about losing rigor or finding a way to oversell our results but instead to actually drive a point home. What did you do why and how. Anna Clemens, a professional scientific writer has a fantastic post on her blog about it and does it far better than I ever could. Also, when ranting on Twitter, the book Houston, we have a narrative was recommended to me, I will surely put it my to-read list.

While I’m on the topic of narratives in science, I’m sure Dr. Stuart Cantrill from Nature Chemistry wouldn’t mind if I share with you his deconstruction of an abstract. Let’s play a game and give this abstract a title in the comments section based on the information vested in it. 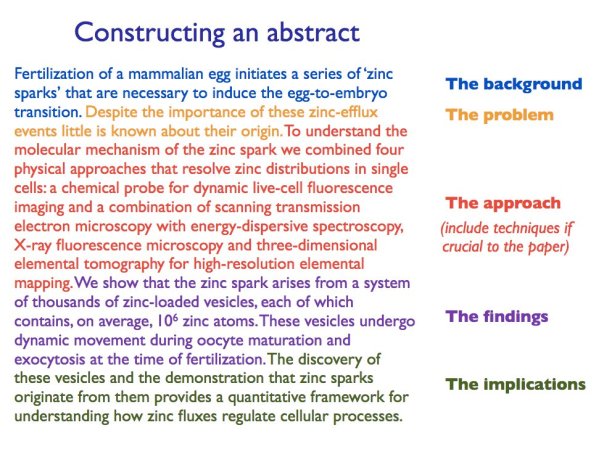