The compound shown below in figure 1 is listed by Aldrich as 4,5,6,7-tetrahydroindole, but is it really?

To a hardcore organic chemist it is clear that this is not an indole but a pyrrole because  the lack of aromaticity in the fused ring gives this molecule the same reactivity as 2,3-diethyl pyrrole.  If you search the ChemSpider database for ‘tetrahydroindole’ the search returns the following compound with the identical chemical formula C8H11N but with a different hydrogenation pattern: 2,3,3a,4-Tetrahydro-1H-indole 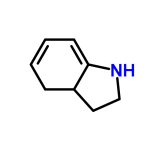 Fig 2. Also listed as an indole

The real indole, upon an electrophilic attack, behaves as a free enamine yielding the product shown in figure 3 in which the substitution occurs in position 3. This compound cannot undergo an Aromatic Electrophilic Susbstitution since that would imply the formation of a sigma complex which would disrupt the aromaticity.

On the contrary, the corresponding pyrrole is substituted in position 2

These differences in reactivity towards electrophiles are easily rationalized when we plot their HOMO orbitals (calculated at the M062X/def2TZVP level of theory): 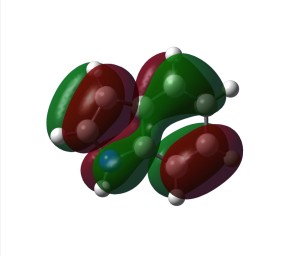 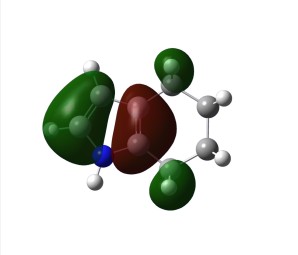 If we calculate the Fukui indexes at the same level of theory we get the highest value for susceptibility towards an electrophilic attack as follows: 0.20 for C(3) in indole and 0.25 for C(2) in pyrrole, consistent with the previous reaction schemes.

So, why is it listed as an indole? why would anyone search for it under that name? Nobody thinks about cyclohexane as 1,3,5-trihydrobenzene. According to my good friend and colleague Dr. Moisés Romero most names for heterocyles are kept even after such dramatic chemical changes due to historical and mnemonic reasons even when the reactivity is entirely different. This is only a nomenclature issue that we have inherited from the times of Hantzsch more than a century ago. We’ve become used to keeping the trivial (or should I say arbitrary) names and further use them as derivations but this could pose an epistemological problem if students cannot recognize which heterocycle presents which reactivity.

So, in a nutshell:

Chemistry makes the chemical and not the structure.

A thing we all know but sometimes is overlooked for the sake of simplicity.