It is with great pleasure that I’d like to announce the thesis defense of Guillermo “Memo” Caballero and Howard Diaz who in past days became the second and third students, respectively, to get their B.Sc. degrees with theses completed at our lab. I want to publicly thank them for their hard work which hasn’t only contributed with a thesis to our library but will soon contribute with research papers to our count.

Guillermo “Memo” Caballero worked on the calculation of a reaction mechanism that cannot happen. He started as a synthetic chemist and when he hit a wall at the lab he thought computational chemistry might help him get synthesis on the right direction. He has proven now that the aromatization process of a substituted glutarimide into the corresponding pyridine can only proceed only if substituents with a very strong electron withdrawing effect are used. For two reaction mechanisms proposed, both of them intramolecular rearrangements and only one of them concerted, the calculated energy barriers to reach for the corresponding transition states (QST2 and QST3 methods used) are higher than a pyrolitic decomposition. Memo found also that the delocalization of the pi electron system and its extent goes a long way into the stabilization of the non-aromatic analogue. At first we wanted to treat this problem as a tautomeric equilibrium but since we cannot observe the aromatic tautomer there is no equilibrium and hence no tautomerism. We are still thinking how to name this correspondence between the two compounds when we submit the corresponding paper. It must be said that Guillermo graduated with the highest honors in a most deserved way.

Two reaction mechanisms. Without different substituents the transformation is not possible.

A man and his work

Memo after his defense

Howard Diaz worked on the design of molecular blockers for the entrance process of the HIV-1 virus into lymphocytes through the GP120 protein. Six known blockers based on phenyl-indoyl-urea were assessed through docking, the binding site of the GP120 protein was described in terms of the interactions formed with each on these compounds and that served as the basis for what in the end came up to be a 36 compound library of blockers, whose structures were first optimized at the B3LYP/6-31G** level of theory. All the 42 blockers were docked in the binding site of the protein and a thorough conformational search was performed. From this set, lead compounds were selected in terms of their binding energies (first calculated heuristically) and further studied at the Density Functional Theory, B97D/cc-pVTZ in order to study the electronic structure of the blocker when interacting with a selection of residues at the binding site. Interaction energies calculated at the quantum level are consistent with the complex formation but since we had to cut the protein to only a few residues little correlation is found with the first calculation; this is fine and still publishable, I just wish we had a more seamless transition between heuristics and quantum chemical calculations. Wiberg indexes were very low, as consistent with a hydrophobic cavity, and delocalization energies calculated with second order perturbation theory analysis on the Natural Bond Orbitals revealed that the two most important interactions are C-H…π and Cl…π, these two were selected as key parameters in our design of new drugs for preventing the HIV-1 virus to bind lymphocytes-T; now we only need to have them synthesized and tested (anyone interested?).

Howard after his defense

Cavity was explored with 6 known blockers

Some of the compounds explored

One by one the interactions with the cavity were calculated

Thank you guys for all your hard work, it has truly payed off. I’m completely certain that no matter what you do and where you go you will be very successful in your careers and I wish you nothing but the very best. This lab’s doors will always remain open for you. 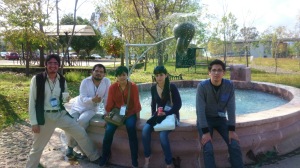