With pleasure I announce that last week our very own Gustavo “Gus” Mondragón became the fifth undergraduate student from my lab to defend his BSc thesis and it has to be said that he did it admirably so.

Gus has been working with us for about a year now and during this time he not only worked on his thesis calculating excited states for bacteriochlorophyl pigments but also helped us finishing some series of calculations on calix[n]arene complexes of Arsenic (V) acids, which granted him the possibility to apear as a co-author of the manuscript recently published in JIPH. Back in that study he calculated the interaction energies between a family of calix macrocycles and arsenic acid derivatives in order to develop a suitable extracting agent. 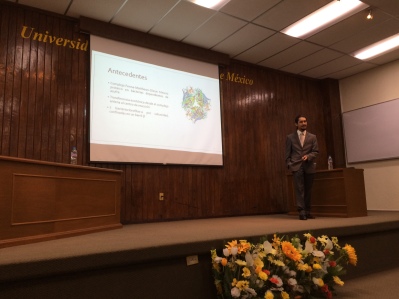 For his BSc thesis, Gus reproduced the UV-Vis absorption spectra of bacteriochlorophyll-a pigments found in the Fenna-Matthews-Olson complex of photosynthetic purple bacteria using Time Dependent Density Functional Theory (TD-DFT) with various levels of theory, with PBEPBE yielding the best results among the tried set. These calculations were performed at the crystallographic conformation and at the optimized structure, also, in vacuo results were compared to those in implicit solvent (SMD, MeOH). He will now move towards his masters where he will further continue our research on photosynthesis.

Thank you, Gustavo, for your hard work and your sense of humor. Congratulations on this step and may many more successes come your way.